There was a great turn out with over 30 budding scientists in attendance on Wednesday afternoon.

Each week we learn about each of the three main branches of science; Physics, Chemistry and Biology, as well as conducting our own experiment.

Scientist of the Week: Friedrich Miescher; who was the original founder of DNA in 1869, although he named it ‘nuclein’.

Element of the Week: Copernicium; a very radio-active element named after the astronomer Nicolaus Copernicus

Animal of the Week: Warty Frog-fish; related to the angler-fish, it looks like it has warts all over its body. It does not swim as it does not have a swim bladder but it has adapted its pectoral (side) fins to use like legs!

Constellation of the Week: Aries; named after the ram with the golden fleece in Greek mythology

Experiment of the Week: Extracting DNA from a kiwi fruit

<<Step 1:  We scooped the flesh of a kiwi into a zip-lock bag  and made sure there was no air in the bag.

>Step 2: The kiwi flesh was smashed into a green, seedy mush.

<<Step 3: A buffer solution was made by adding some salt and washing up liquid  to half a cup of water. We had to dissolve the salt in the solution but we had to be careful to stir this very, very slowly as we did not want bubbles to form.

>>Step 4: Half of the buffer solution was added to the kiwi flesh in the zip-lock bag. This was mixed thoroughly.

<<Step 5: We left the zip-lock bag rest for 10 minutes. Then we filtered the liquid from the solids using a

coffee filter and a jar.

>>Step 6: This part must be carried out by an adult! Ms Hickey poured a small amount of methylated spirits down the side of the jar into the filtered solution 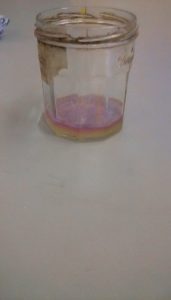 <<Step 7: The solution was then stirred carefully. A purple layer formed on top of a the green liquid.

Result:The alcohol from the methylated spirits dehydrates the DNA making it clump together and visible to us. You can see it in the bottom two photographs.

As Archimedes once famously said “Eureka!!!”

Until next time Science Clubbers 🙂

Find out more or adjust your settings.

This website uses cookies to provide you with the best user experience possible. Cookie information is stored in your browser and performs functions such as recognising you when you return and helping understand which sections of the website you find most interesting and useful.

This website may also, at certain times (e.g. when submitting a Contact Form, making a purchase), ask you for personal information like your name, email address etc and more.

Such information will be:

Strictly Necessary Cookie should be enabled at all times so that we can save your preferences for cookie settings.

If you disable this cookie, we will not be able to save your preferences. This means that every time you visit this website you will need to enable or disable cookies again.

This site uses cookies – small text files that are placed on your machine to help provide you with a better user experience.

In general, cookies are used to retain user preferences, store information for things like shopping carts, and provide anonymised tracking data to third party applications like Google Analytics or others.

While they do improve your browsing experience you may prefer to disable or manage cookies for this and other websites. You should search online for instructions on how to do this for your particular browser.