We entered Markree Castle and waited at the reception where we met our tour guide Les. He informed that the Cooper family owned the castle for over 400 years! He showed us the stained glass window at the top of the main staircase that displayed the Coopers family tree.

He told us several stories about Markree Castle. The first room we went into was the main living room and it had large marble columns in it. Secondly we visited the chapel (church) it was floored with Ethiopian oak wood. It is the only Ethiopian wooden floor in Ireland!

We then visited the men’s lounge room were Les told us about a time when a young child crumbled cookies into an expensive carpet. The bride was worrying about how much it would cost to get it cleaned. However, Les told her that it didn’t matter because they paid a lot of money for their wedding and it was their house for the weekend. 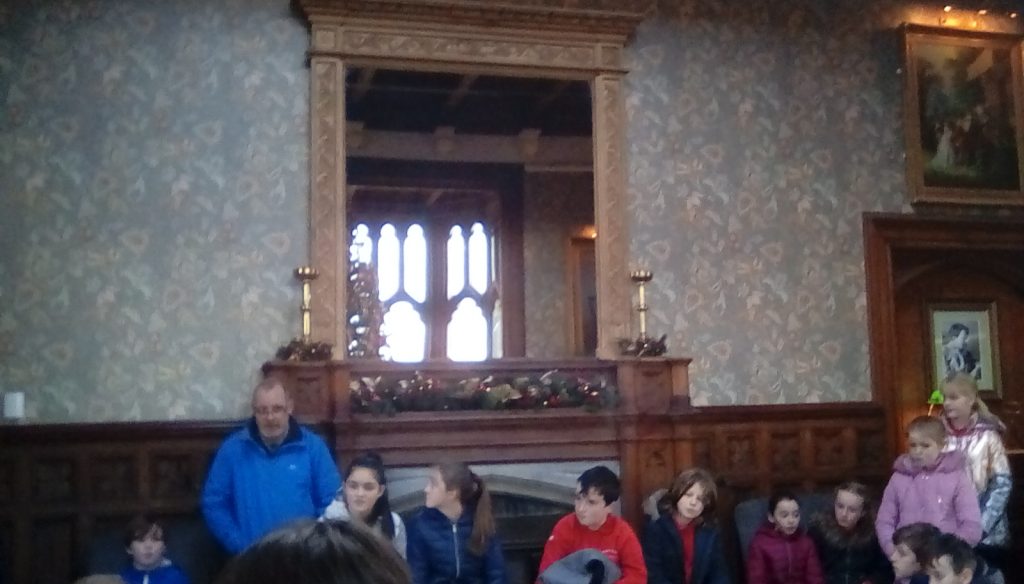 We then visited the dining room, it was huge! It was very fancy and had several chandeliers. The original dining room that came with the hotel was smaller but the Corscadden family built an extension and moved the kitchen, making the dining room bigger.

He then told us of the ghost haunting Markree Castle named Pippa. The story is that a young child died after falling down the stairs of Markree Castle. We don’t know the name of the child when she was alive, but Les’ wife named her Pippa. Pippa is very mischievous and often plays tricks on people, like locking them in their room and causing them to drop trays and items. One Christmas before leaving for Cavan, the owners bought Pippa a Christmas present. This stopped her causing trouble. An American couple who came to Ireland especially to get married in Markree Castle brought with them presents for Pippa. Their wedding went of without a hitch!

We went to Johnny  cash room which is number 28. Johnny  cash and his wife June stayed there for Halloween in 1990. We also saw a room that the floor and roof matched.

We went to a with a huge billiards table with old fashioned  balls that were approximately 250 years old.

We went down to the basement it had two bars and a disco floor. There was an Irish flag hanging in the Grand Hall that is more expensive than what it cost to renovate Markree Castle itself. It is from the Easter Rising in 1916 Where it flew from Boland’s Mill in Dublin. 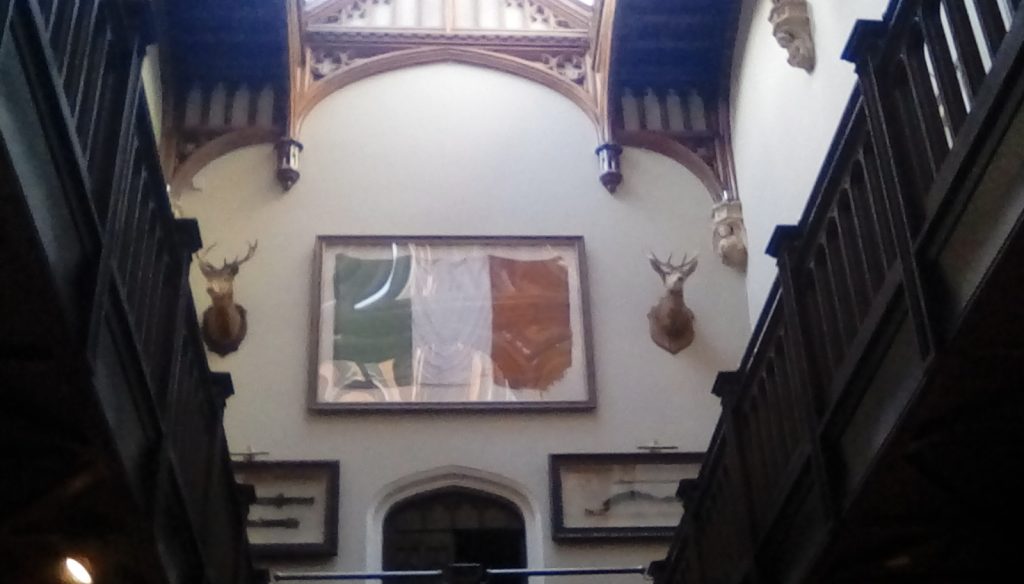 There is a story of a two year old girl who was staying in the castle. One night she woke up her mum up as she was talking. Her Mum  came over to her and asked who she was speaking to. The little girl pointed to the corner and said “My friend”. There was nobody there!!! Was it Pippa???

We also got to visit the boathouse and the large gardens. We thoroughly enjoyed our day and would highly recommend visiting if you ever get the opportunity.

We would like to say a massive thanks you to Les, the staff and the Corscadden family for having us. We had a fantastic time!

Find out more or adjust your settings.

This website uses cookies to provide you with the best user experience possible. Cookie information is stored in your browser and performs functions such as recognising you when you return and helping understand which sections of the website you find most interesting and useful.

This website may also, at certain times (e.g. when submitting a Contact Form, making a purchase), ask you for personal information like your name, email address etc and more.

Such information will be:

Strictly Necessary Cookie should be enabled at all times so that we can save your preferences for cookie settings.

If you disable this cookie, we will not be able to save your preferences. This means that every time you visit this website you will need to enable or disable cookies again.

This site uses cookies – small text files that are placed on your machine to help provide you with a better user experience.

In general, cookies are used to retain user preferences, store information for things like shopping carts, and provide anonymised tracking data to third party applications like Google Analytics or others.

While they do improve your browsing experience you may prefer to disable or manage cookies for this and other websites. You should search online for instructions on how to do this for your particular browser.